The Consortium was incorporated as a non-profit organization in Evansville, Indiana, in Fall 1985 as the Consortium for Computing in Small Colleges under the direction of Will Mitchell, who along with Wally Roth and Christine Shannon formed the Board of Incorporation. Its purpose was to publish articles and papers related to computing from small institutions. The first issue of the Journal of Computing in Small Colleges was mimeographed and distributed to over 200 faculty in October 1985. It contained 32 pages and five papers.

The first CCSC conference was held in what is now the Southeastern region in Fall 1987, modeled after the Eastern Small College Computing Conference (ESCCC) which had begun in 1985. New regions and conferences were organized as attendees moved to other regions or wanted to organize a conference closer to their institutions. The South Central conference began in Spring 1990, and the Rocky Mountain conference followed in Fall 1992.

In 2002, in recognition that small programs in larger schools have similar issues as programs in small schools, the organization name was changed to the Consortium for Computing Sciences in Colleges (retaining the CCSC moniker). After some tension regarding how new regions are formed, the Midsouth region was accepted into the Consortium in 2005 after several successful conferences. The tenth region, the Southwestern region, was formed in 2008. The Journal of Computing Sciences in Colleges currently is published as ten digital issues per year containing over 100 papers presented at the regional conferences.

Based on presentation notes written by Will Mitchell 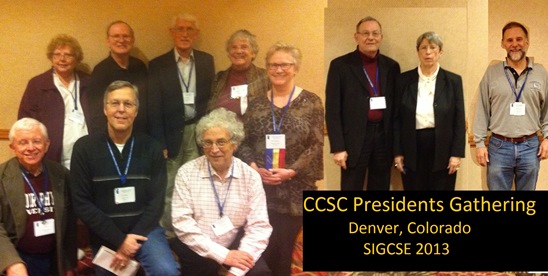