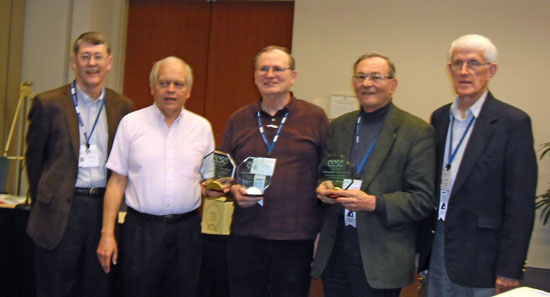 John Meinke received an M.S. in Computer Science from the Illinois Institute of Technology. He is currently the Program Director for the University of Maryland European Division. He has also held appointment at DeSales University where he served as chairman of the Math & Computer Science Department. John has been involved in the work of the Consortium since the late 1980s. He has served on various committees including the Finance Committee and the Bylaws Committee. His largest contribution to the Consortium though has been his service as Publication Chair where he has edited and overseen the publication of every issue of the Journal of Computing Sciences in Colleges for the last 20 plus years. He has worked tireless editing manuscripts, coordinating the yearly publication of the proceedings for ten regions, ensuring copyright forms are in order, and that papers are published in the ACM Digital Library prior to each conference.

Dr. William Mitchell received a B.S. in Mathematics from Maryville College, an M.S. in Mathematics from the University of Tennessee, a graduate minor in Computer Science from Vanderbilt University, and a Ph. D. in Mathematics from George Peabody College. He has spent his career involved in teaching and curriculum development in computer science. He is the author of numerous articles on computer science education. He retired in June of 2004 from the University of Arkansas Little Rock where he served as Associate Dean of the Donaghey College of Information Science and Systems Engineering and as Director of the Information Science Program. Additionally he has held appointments at Louisiana State University-Shreveport and at the University of Evansville where he developed a retraining program for computer science educators. He is the founder of the Consortium for Computing Sciences in Colleges and has served for years as Conference Coordinator. He has worked tirelessly since the Consortium’s founding on its behalf.

William Myers received a B.S. from Purdue University, an M.A. from the University of Colorado-Boulder and an M.S. from University of Evansville. He teaches at Belmont Abbey College where he serves as chairman of the Professional Affairs Division. Bill has been involved in the work of the Consortium since the late 1980s serving first as Membership Secretary and later as Treasurer. He also served on various ad hoc committees of the Board and serves as the Board’s Parliamentarian. He has worked tirelessly on behalf of the Consortium spending hours with IRS regulations and tax returns.

Congratulations to the three M’s: John, Will and Bill!