The CCSC presented the 2016 CCSC Distinguished Service Award to George Benjamin and Ingrid Russell during the CCSC General Business meeting held on March 4, 2016. George has been the long-time associate editor of the Journal. Ingrid has been active in the Northeast region and has served as the CCSC President. 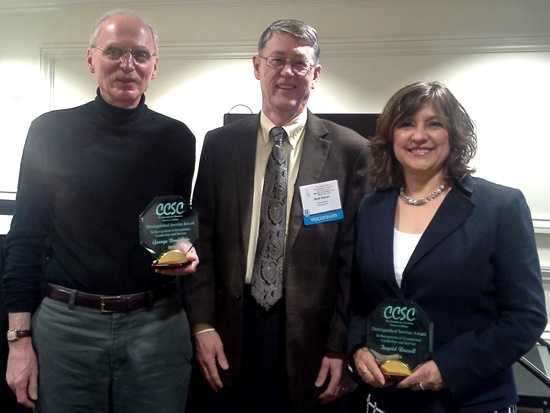 George Benjamin has taught at Muhlenberg College since 1983, and has a long history of active contributions to the CCSC:Eastern region, and the earlier Eastern Small College Computing Conference (ESCCC). From 1984 to 2009, George was on the Steering Committee for ESCCC and then CCSC:E. He chaired the 1992 CCSC:Eastern Conference, and plans to chair it again in 2017. George is one of the most reliable supporting pillars in a distributed volunteer organization with its share of strong and unusual personalities.

George has been Associate Editor of the Journal of Computing Sciences in Colleges since 1996. When Journal editor John Meinke left the United States in 1993, George agreed to serve as the intermediary with the CCSC printer, accomplishing the final proofing for all issues of the Journal. He has done this faithfully, and has been a critical part of the editing team for the last 20 some years. In this role, George proofs final copies of proceedings, approves them, and accepts mailing lists for distribution, all critical elements of the production schedule. CCSC would not have had a Journal in the 1990’s had it not been for George being there as the intermediary. He has been an essential and largely unheralded supporter of CCSC.

At Muhlenberg, George has developed and taught a wide variety of courses in computer science and mathematics. In 1992, he received the Lindback Award for Distinguished Teaching. He has advised student projects and activities including programming contest teams and a robotics team. He has also administered the departmental Linux network and a variety of related devices. He was department head from 1996 to 2004. His work is often of the invisible, behind-the-scenes variety that requires significant time but which few people highlight unless there is a problem.

It is with great pleasure that we present the 2016 CCSC Distinguished Service Award to George Benjamin.

Ingrid Russell is a Professor of Computer Science at the University of Hartford, was the founder of CCSC:Northeastern, and was its first chair from 1995–1998. She was the CCSC Board President from 2001&ndash2002, ultimately serving for six years on the Board. She was the CCSC:NE conference chair for two conferences held at the University of Hartford, the very first CCSC:NE meeting in 1996 and the 2010 meeting. The meeting in 2010 – the fifteenth anniversary conference – was the largest in the region’s history, with over 330 attendees. Ingrid worked extremely hard to make that conference a great success.

Ingrid is not only responsible for the creation of CCSC:NE, but she has worked diligently as a regional board member for the entire history of the region. All those in her region find Ingrid to be – as described by one colleague – fantastic. She is able to handle a wide range to tasks (seemingly) effortlessly, is always completely on top things, encourages others, and knows what has been done in the past and what needs to be done in the future. Everyone involved in CCSC:NE agrees that Ingrid has been the driving force behind the region’s success since the beginning over twenty years ago.

Those outside of the region agree. In 2006, Ingrid was among 15 “CRA-W Distinguished Professors”. She was a finalist for the 2006 Women of Innovation award in the Academic Innovation and Leadership category, sponsored by the Connecticut Technology Council. She is the recipient of a Yale Prize Teaching Fellowship, a NASA Fellowship, and a CCSC:NE Service Award. She has served on several NSF review panels and on advisory boards of NSF-funded projects. In addition, she has done extensive work in the area of computer science education and curriculum.

It is with great pleasure that we present the 2016 CCSC Distinguished Service Award to Ingrid Russell.