The CCSC presented the 2017 CCSC Distinguished Service Award to Richard “Dick” Hull and Gail Miles during the CCSC General Business meeting held on March 10, 2017. Dick and Gail have active in CCSC since its founding. Both have served in many roles in the Southeastern region for decades, as well as serving as President of CCSC. 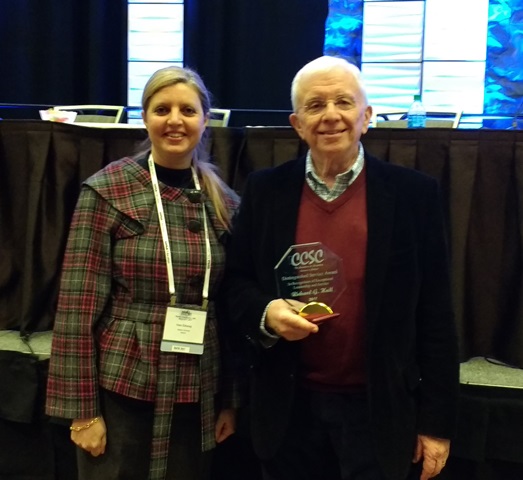 From left: CCSC President Hala ElAarag, Awardee Dick Hull. Gail Miles was unable to attend the 2017 General Business Meeting and will receive her award at the 2017 CCSC:Southeastern Conference.

Gail Miles and Dick Hull have fostered meaningful collaborations and friendships in the CCSC:Southeastern region for decades. They were instrumental in the establishment of CCSC:SE, and have been effective mentors to a generation of CCSC participants, both in and out of the region. For many years, they not only ran the Department of Computer Science at Lenoir‐Rhyne College all by themselves, but they were the heart of the annual operation of the CCSC: Southeastern region, and part of the foundation of CCSC itself. It is most appropriate that both be recognized simultaneously since they supported each other in their respective roles with CCSC and with the Southeastern region.

Both Dick and Gail had a passion for CCSC and the Southeastern region. They served as site chairs and hosts for the region’s fourth conference in 1990, and they went on to host twice more, in 1997 and 2005, always putting on a well‐organized and consummately professional event. They were prolific authors, contributing refereed papers at nearly every conference. Additionally, they served on the regional board for years and were innovative thinkers with regard to the governance of the region. One board member speaks of fond memories of talking for hours with Dick and Gail during the conference about what was working, what wasn’t, and what could be done better.

Lenoir‐Rhyne has participated in the regional programming contest ever since its inception in 1994, primarily under Dick’s enthusiastic guidance. Most years he served as a judge during the conference, and often contributed contest problems.

Gail and Dick’s influence with CCSC extended far beyond the Southeastern region. Gail served a term as CCSC president in 1990‐91. At the time, that also included a year as president‐elect and another year as past‐president. She also served as Membership Chair and as the Southeastern Regional Representative. For several years she was also the CCSC representative on the board of the National Educational Computing Conference (NECC), an influential position that greatly increased the visibility of CCSC.

Dick also served as CCSC president in 1997‐98, (also including the years as president‐elect and post‐president). Together, they had a significant influence on the growth and maturation of the organization.

It is with great pleasure that we present the 2017 CCSC Distinguished Service Award to Gail Miles and Dick Hull.